The Derwent - Scale and grandeur of Scarborough 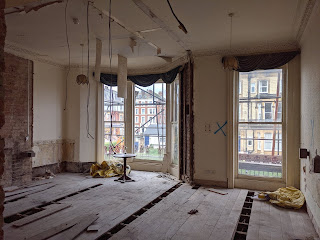 During the recent works on The Derwent we have removed much of the twentieth century alterations to the original building and in so doing have unearthed some fresh insights.

The scale of some of the rooms, once dividing walls have come down, reveals how large many of the original rooms in Scarborough’s townhouses really were. A significant number of Scarborough houses from the 1800s and Edwardian period have remarkable plasterwork in cornices, rails, and skirting boards, but these have frequently either been covered up by building work, lost, or disrupted by room divisions.

The Derwent, built in the 1850s as part of the exclusive Esplanade Gardens development, was an ornate building facing the private gardens, access to which meant negotiating with the Garden’s own private police force - it was in every sense a Victorian gated community. One in which the leases specifically refer to restraining your servants from picking flowers in the private gardens. 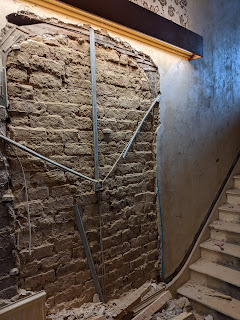 Much to our surprise our builders have found hidden doors on three floors, giving access to both adjacent buildings 14 and 16 Esplanade Gardens.

Maybe these were put in when the houses changed from being private houses and were for a time a three-bay hotel. It is hard to say, but we have all learned to respect the quality and sturdiness of the work done by the Victorian builders.
Posted by Hotels of Scarborough at 15:59 No comments: