As you can see from the sign today we have become Rowntree Lodge.

On 14th November 1876 Messrs J S Rowntree and J Cadbury took out a joint mortgage to purchase No 17 West Street as a shared holiday house in Scarborough.

As Joseph Rowntree is widely regarded as the father of marketing, it seemed only right to rename the hotel after its original owner.

Posted by Hotels of Scarborough at 16:13 No comments:

Ghouls at The Redcliffe

Ghost hunters were on the prowl this weekend


The lights were burning late into the night on Friday night, 7 February, as The Redcliffe Hotel played host to a team of six ghost hunters introduced by Scarborough aficionado Jason Lee, and very possibly to a selection of ghostly presences. 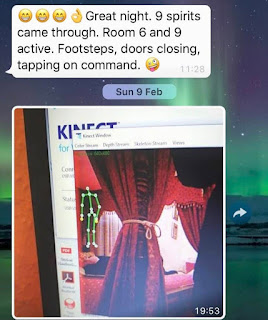 The team had access to the full hotel for the weekend, as The Redcliffe had only just opened having been temporarily closed while rooms were redecorated before the coming season. The works had not disturbed what was forecast to be a rich site.

If you have stayed with us before in Rooms 6 or 9, you were possibly not alone. Both betrayed evidence of activity caught by the Kinect scanners used to identify apparitions. Indeed one seemed to be suspended some distance above the floor, which might raise concerns as to the reason or fate of some past individual.

The Dark Realms Facebook page has some video footage of the weekend. While more can be learned of the equipment at Polygon.

We look forward to seeing, hearing, and experiencing more from Claire, Jess, Justin, Kerrie, Lewis, and Suzie-Lei in time to come … but maybe not too much from their discoveries.
Posted by Hotels of Scarborough at 17:51 No comments: